Line B of the rapid transit train network, RER, serves CDG via two stops. Aérogare 1, which is purely an RER station, is in Roissypôle (next to terminal 3); Aérogare 2, from which regular trains also operate, is between terminals 2C and 2E. It is considered the main train station in the airport, and signs pointing to ‘Gare’ or ‘Paris par train’ will probably be referring to Aérogare 2. RER trains to Gare du Nord in central Paris take around 35 minutes. To get to Bercy train station, yopu can take line B as far as Chatelet les Halles, switching then to Line 14 towards Olympiades, of which Bercy is one of the stops.

As mentioned, Aérogare 2 is also a hub for mainline trains, operated by the French national rail providerm, SNCF. High-speed TGV trains whisk passengers from here to central Paris and other French and European cities. 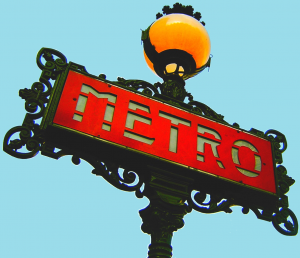 A sign for the Paris Métro (Photo: fabbio (Flick))

Normal, slower trains are available too. Any enquiries about trains can be taken to the SNCF enquiries desk on the fourth floor of terminal 2.

Line B of the RER also interconnects with the Paris Métro. Tickets for the Métro (and local RATP buses) can be bought individually or in packs of ten (un carnet), which is cheaper. If you are staying in Paris for more than a day, think about getting a Paris Visite card, which gives you unlimited travel on most modes of transport as well as discounts at museums and other attractions.

Getting to your hotel from the airport

If your hotel is located somewhere in the city centre, the easiest and cheapest way to get there will undoubtedly be via a combination of the RER and Métro lines. Start by taking the RER B line from Charles de Gaulle, which runs down to the south of the city and connects to major Métro stations including Gare du Nord and Chatelet. From here you will need to check the Métro map to work out the most direct route to your hotel – you can find a good map detailing all the lines here. Charles de Gaulle is in the top right hand corner on the thick blue RER B line.

Not sure what the nearest Métro station to your hotel is? SubwayHotels.com lists a huge range of Paris hotels with reference to their nearest tube station, so you can simply search for your hotel to find out.